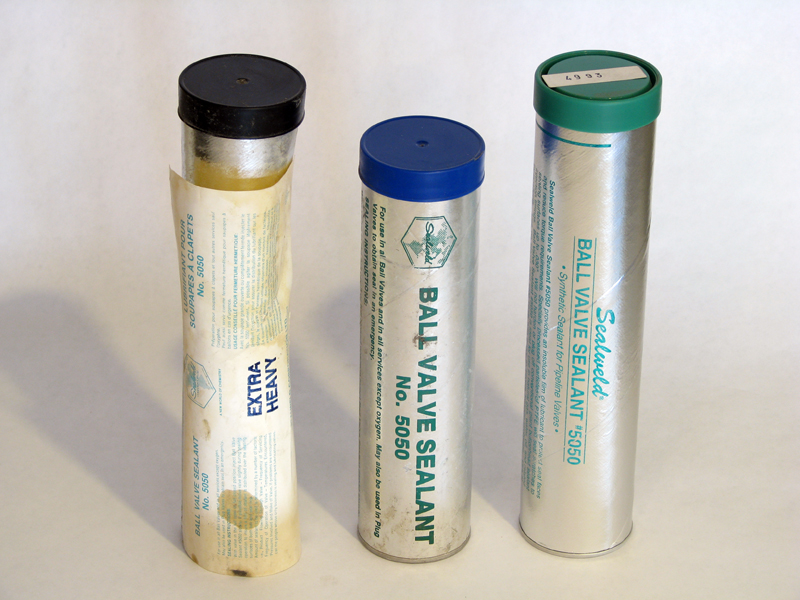 Sealweld Corporation has always promoted its synthetic valve lubricants and sealants as longer-lasting than the competition’s. Well, once again, Sealweld products have proven to withstand the test of time. During Spring cleaning this year, company CEO, Dean Chisholm, came across two sample jars of sealant (one with #5050 Ball Valve Sealant and one with Extra Heavy #5050) long lost and forgotten.

Based on the labels, they are estimated to be at least 15 years old and possibly as old as 20! Sure enough, when the jars were opened, the contents looked the same at the first day they were mixed. The colour, consistency and physical properties seemed to have retained their original state after decades in storage. Dean, however, was not so easily convinced at first sight. He immediately sent the samples to the quality control department to analyse them on suspicion that there was a breakdown on a molecular level.

After a thermal balance and penetrometer reading, QC was astonished to find that the samples were well within acceptable range! Other than the fact of the sealant being around longer than most of the senior staff, it very well could have been injected into a leaking valve and still worked perfectly.

This isn’t the first instant like this we’ve ran into. Last year, a customer had ordered too many pails of Total-Lube #911 and returned several pails in varying condition. Tucked away near the bottom was a pail, rusted and dented with a faded sticker clinging to the side. How could we resist? The shipping and receiving manager plunged his screw driver under the pail lid and pried it back. The surface of the synthetic lubricant appeared dry and cracked and beyond its expiration.

It wasn’t until a scraper was sunk into the grease that its true consistency was realized. Sure, the surface had cracked and separated, but it was also soft and pliable. After a few quick strokes of the scraper blade, it could have been ready for repackaging and resale. The Sealweld pump repair department has seen many samples of lubricants and sealants from competitors come through the warehouse, none with the lasting power of synthetic-based products like these.

This is only made possible by starting with quality synthetic oils and taking years to develop and improve a superior product. Through thousands of man hours, in the lab and in the field, these Sealweld products have been tailored to meet and exceed industry standards. They have been tried and tested by pipeline operators and technicians around the world for over 40 years and continue to adapt to an ever-changing industry that demands reliability and safety at all steps. This is a promise that we endeavour to uphold… the best quality you can find with no exceptions.