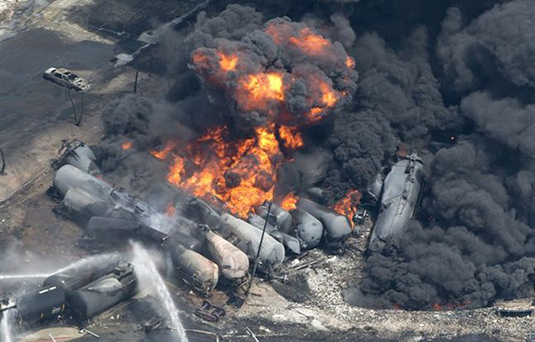 It’s almost impossible to imagine the destruction of a small town and the deaths of 47 people being caused by something as trivial as a broken piston. When the Montreal, Maine and Atlantic Railway payload barrelled down into the heart of Lac-Mègantic in the first hours of July 6th, a chain of equally trivial events caused Canada’s second worst rail disaster. In the deficit of trans-Canadian pipelines, more and more petroleum be may transported by rail through populated areas increasing the risk of further tragedies like this one. Is our domestic energy strategy so dependent on shipping crude south of the border and across the Pacific that we forget about refineries and markets in our own backyard?

Certainly, there is reasonable resistance to the proposed Northern Gateway pipeline due to the potential environmental impact of an oil tanker running aground in the Douglas Channel or Wright Sound. Considering the sheer size of modern transport ships, that scale of destruction would make the Valdez incident look like a drop in the bucket and would decimate an ecosystem for a generation, if not more. China is already ramping up their own domestic energy program which would make the Northern Gateway and its Asia-bound commodity moot.

The proposed Energy East Pipeline would tap Alberta and Saskatchewan crude straight into a market that has existing infrastructure to refine and ship product through established routes on the Atlantic. Unlike the contentious Keystone XL Pipeline, we need only domestic approval in order to break ground in a $12.3-billion project including a deep-water marine terminal off the coast of St. John, Newfoundland. With a well-executed valve commissioning program, PM schedule and smart pigging regiment, there’s no reason this pipeline couldn’t operate problem-free for the foreseeable future.