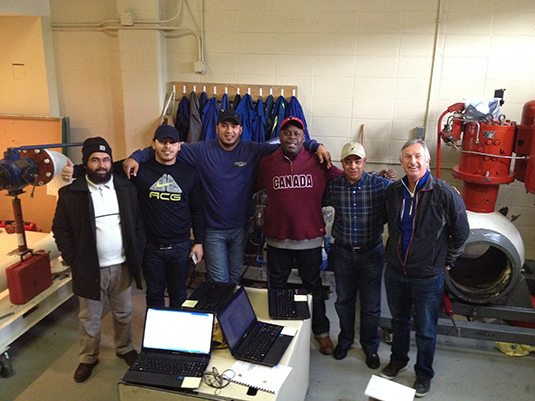 We felt very honoured to host two groups of mechanics, technicians and engineers from Mellitah Oil and Gas, Libya through the end of November and beginning of December. Although the weather did little to cooperate, all 10 delegates completed a crash course in pipeline valve maintenance safety training and now tout PTEX certificates.

Despite the highly intense and condensed training sessions, both groups found a little time to enjoy some downtime on the frigid streets of Calgary and Banff. I was particularly lucky to introduce the first 5 students to their debut NHL game in the Saddledome. Unfortunately, the Flames lost an overtime decision to the Blue Jackets in a lackluster match-up but they got to see the place light up after an amazing bicycle kick save by Reto Berra and a tying goal early in the 3rd to force the issue.

Group 2 got a taste of the arctic when the season’s first blizzard enveloped the city December 2nd, bringing traffic and business to a screeching halt. Fortunately enough we decided to visit Cross Iron Mills that day so, needless to say, there was ample parking outside and plenty of elbow room inside. Not to worry, I made sure they understood that this weather isn’t typical to the beginning of December and that the caricatures of Canadians driving dog sleds and fending off polar bears are only slightly exaggerated. I don’t think they believed me.